'For Ascalon and Oink!' heard in Battle Islands

Team Arena's -The guards of Team Arena's looked rather suprised when Gryphine walked up to the gates demanding acces to the battle grounds. After warning all females in the area he was granted acces, as the Zeishen believe everybody is allowed to fight in the name of Balthazar.

A group Defenders of the Blackblade decided that they should also grab some favor with the god of war whilest the Arena's were blessed. Gryphine of Nor, Devs Pvp Nec, Ruby Salvato and Mistress Polgara set foot in the Arena, very much uncertain what to do. The hero's that fight here are different and mostly more skilled then the normal monsters they face on a daily base. Ruby Salvato, who knows the Zeishen the best out of the group, normally only goes down to the Arena's to be randomly pared with others was willing to grant us a few words after the fighting was over with.

"It was a rush, normally I team up with random people and there is no teamwork. Because we Defenders work together more often we have a feeling for each others skills. Ofcourse the opponents faced here are more fierce then I've encountered in the Random Arena's, the fact that I have a monk I know I can trust and a damage dealing backline that actually work together makes such a difference. Also teammates with a sense of humor makes the whole bloodshed experience more fun. When the Zeishen priests raised our corpses after defeat we used the experience to learn or just recklessly run back in", miss Salvato explained.

The team won several matches which were very well played. They bulldozed over some teams who probably never even faced a Shadow Beast in the Fissures of Woe, the warriors of those teams were hexed with a Spitefull Spirit and continued to bring their own team down. But also they got bulldozed over by teams with plenty experience in the Zeishen Arena's. All in all the Defenders made a lasting experience on the Arena's, that the local Xunlai agent hopes to forget as soon as possible.

Overpopulated servers and clicking players made this years Halloween annoying! 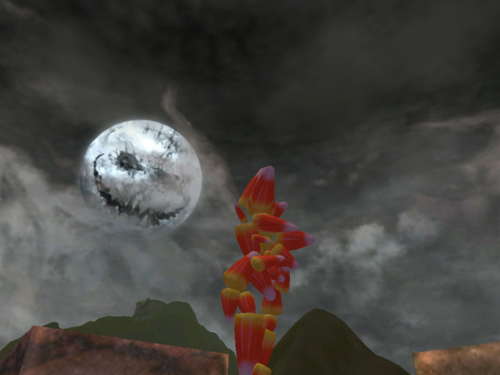 Lion's Arch Once again Halloween is over. As an annual event of festivities, horror and ugly monsters, the major towns of Kryta and Elona were full of excited players who attended to take part of this gorefest. Decorations were made days before the actual main event took place. Majority of the NPC's in Lions' Arch were transformed into some of the ugliest beings in Guild Wars. Horsemen traded potions of Absynthe, Brew etc. One of the funniest things was a Ghost-in the-Box, a skeletal monster who popped out and said "Boo!". The towns also included mummies, skeletons and tree-people.

As the day of the Mad King arrived, aNet added several servers to the game to keep players out of lag and overpopulation. He appeared over every 3 hours and had games and distributed gifts. Finally who took part of the games were given a special treaty, a Pumpkin Hat, as Elonian players got a Wicked hat. The only problem was that, even aNets server adding the people still had lagg, cause even with 50+ servers the towns were quite overpopulated. Also, when Mad King appeared, some of the players started clicking on him and that made him somwhat delay his talking. Was it Halloween we all love or Hell-oween of lagg and impatient players or a fest of fun and gore? I guess everyone can speak for themselves.

Spread the word, Shiro the traitor has been slain!

Imperial Sanctum - His end met by the hand of a group of heroes who prevailed above all else, they stormed Raisu palace. Ignoring the guard’s warnings and putting their own lives in peril they charged onwards killing demon after demon, constructs after constructs, the echoes of their battle cries making it to the entrance of the palace “For Ascalon and Oink” could be heard.

After their gruelling battle to the central of the palace a terrible blow was struck, Master Togo can in to save his half brother; the emperor from death, but that was all the sacrifice that Shiro needed, with blood from the emperor’s bloodline his freedom was assured.

The heroes pushed onwards, with only a moment’s rest, taunts from Shiro failed to affect them as they attacked Shiro with all their might!

Spells flew, hexes were cast, bow strings pulled taunt and muscles tightened as the battle raged on for a full thirty seconds! At the end Shiro fell and the heroes were victorious!

As they proudly marched through the Divine pass way citizens, henchmen, officials and solders all paid their due respect to the heroes – the saviours of their homeland, and at the final end – the emperor himself blessed the heroes with his presence, thanking them for all that they have done. So strong were his emotions that he could not contain it any longer, and allowed the whole of kaineng to see his majestic dancing skills!

Xunlai Storage Agent: - As a storage agent I see many pass this way. Few return. We at Xunlai have heard of the reputation of the Defenders of the Blackblade, but as we watched the brave group enter the inner sanctuary we feared for their lives. Even as we mourned the slaying of so many phoenix.

Hasung (Merchant):- I myself cheered the brave souls on their way. For to be sure if they returned there would be spoils to be sold and bought.

We managed to catch up with Neferet Swiftshot after the victorious mission ‘It was amazing to be a part of this mission, watching my guild companions fighting. The enormity of there wisdom and skill was breath taking. After racing through the palace in an amazing time of 15.01 they roared as the adrenalin carried them on through to the viper Shiro Tagachi, *laughing* he never stood a chance. I swear I heard him beg for mercy but that may have been my imagination. Master Togo would have been proud.’

It has been rumoured that in far flung Elona, even the nobles raised a glass or two to the brave.

Yes, DotB have gotten crazy for those titles, some say they're not but more and more show their true colors.
Most are going for the Protector of Elona or the Grand Master Elonian Cartographer. But some silly people are going for the LB titles to then realise that to get the maxed LB title you need to be an unemployed lonely bastard. The group of DotB members anxious to get the Sunspear Spearmarshal title is growing and so is the pressure on ANets hardworking crew. I have recieved quite secret info that we will soon have a Kind of a Big Deal (1) member among us (not me, if you for some reason thought so). This not so hard working reporter will keep looking at what people get what titles and how.

DotB brings back the true meaning of Christmas 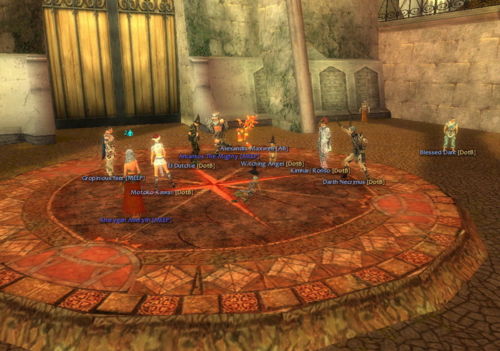 This reporter got the invite of the year, Christmas party at DotB’s place.

On arrival at Kamadan, this reporter realized she was already late; messages were queuing up to inform her. As she took the fast lane to the Wizards Isle excitement started to get to her. The first sight was a host; not of angels singing, but candy men dancing. The Christmas drinks had obviously been flowing for a while. Various stages of drunkenness was observed, from slightly inebriated. to down right drunk and disorderly, wild abandoned dancing was the order of the day. This reporter felt it wise to join in, for research purposes only it must be understood.

The convivial host come bartender was the erstwhile Kimhari Ronso and boy can he throw a party. In the true spirit of Christmas, presents were given to each and everyone. All were all of a green colour in some cases rare greens were handed out and indeed bought smiles to many a player.

The Christmas ‘spirits’ as aforementioned had been flowing for a while, and murmurs of ‘oh no not again’ and ‘I think im going to be sick’ could be heard. The Guild Lord did look a little harassed as many non DotB were there, from such highly respected guilds as ‘MEEP’, ‘AB’ and ‘MiSS’. In his own words…

“I am aware that many of my own guild are unable to hold strong liqueur, the possibilities of bloodshed here is enormous”

Obviously a great deal of hard work and indeed many generous hearts helped in the making of this wonderful event, but the Guild Lord did look with pride at Kimhari the instigator of such a wondrous time.

Once again the Defenders of the Blackblade showed the world their lust for revenge. After finally battling through the Gate of Madness they stood on the precipice of madness itself and stared into the depths of Abbadons crazed mind.

Witchie had already sacrificed herself many times for the honour of the guild. And as ever was ‘always ready’. Darth Necrimus, Aki Kusangi, Devils Death Reaper, Karede Paendrag, Griphyne of Nor and Divinely Patient stood and surveyed the challenged that awaited them. Each knowing they may never step out of the mouth of hell. With determination and cries of ‘For Ascalon and Oink’ the intrepid heroes advanced.

They were immediately besieged by the Craven Monoliths who protected that evil presence. And as the Words of Madness seeped into their brains they started to know fear. Battling with all their might and skills they punished the monoliths. Even decimating the Tormented Claw before its 100+ damage would effect them.

As they tried to catch their breath they heard a new sound, the Earth Shattering Blows and the Corrupted Power swept over them. As they fell to the floor Abbadon rose up before them in all his might and now they felt true fear.

Lightbringers Gaze was unleashed by our heroes as they struck with all there might again and again. The evil started to diminish victory was in sight, but no they hadn’t breached his defenses and as his might reached out to them they were forced to retreat. Once again the Monoliths rose to fight. Again and again the heroes fought the monoliths and weakened Abbadon, they would not give up. This was for the honour of the guild and to save the world.

Three times they advanced into the maw of death; three times they were beaten back. However Abbadon had never met such Stalwart heroes before. And finally on the fourth attack that evil presence was ended.

What happened next was truly astounding. As the evil presence started to crumble all its power began to become unleashed. What could they do now!

Kormir, the sunspear who had led them to this path spoke to them. She would sacrifice herself for the good of mankind. And saying this she stepped into the vortex. They all watched in horror as Kormir turned to sacrifice herself to contain abbadon, Griphyne could be quiet no longer and released his passionate feelings for Kormir into the open as he cried ‘’No! Kormir Nooooooo’’. And thus her fate was sealed. As the forces drew around her the heroes watched in amazement as she turned into a God. A new God for Elona, a God for peace.