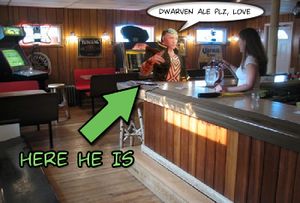 Griphyne Of Nor is a Defenders of the Blackblade officer, or so he claims.

Also known as 'Aylward Griphyne' and 'Third Son Of Tiehten'.

Although if he spawns he ideally lets others around him use their skills instead of him.

If he spawns without pants he will not drop that item, and the player should be aware of additional ferret spawns

Born in the early months of 1043AE, during the very heart of the Guild Wars, was the third son of Delbert Tiehten Of The Great House Nor, thirteenth male of the bloodline, Aylward Griphyne. In accordance with the rituals of the house, the boy was to be given unto the head of the household at the age of six for training in survival and the arts of the wilderness, until such time as they became worthy in the eyes of their mentor. However, at the exact time of Griphyne’s sixth birth date, the current head of the family and his grandfather, Delaney Murceayt Of The Great House Nor, had finally succumbed into the far reaches of his madness and no longer possessed the ability to train of the bloodline. As with tradition, the duty was passed to the next in line, Griphyne’s uncle, the enchanter Uncas Hiedrah Of The Great House Nor. Hiedrah was well known in the family for his impatience, and when faced with the already disruptive pupil of Griphyne, found himself increasingly resorting to punishment for the constant failures of his nephew. What Griphyne learnt of enchanting at this time was negligable, and took only from his studies a pleasure in his ability to reduce his uncle to fits of anger against him. This uneasy alliance between mentor and pupil continued for two years when, still unfit in Hiedrah’s eyes, Griphyne was joined by the last potential Nor, his six year old brother Lycan. Unlike Griphyne, Lycan had a passion for learning, and quickly grasped the concepts taught by his uncle. As to be expected, Hiedrah turned his full attentions to the instruction of his newer, more willing student and Griphyne was all but ignored. That is to say, he was granted a resilient, unearned recognition and coming of age ceremony by his uncle, merely to be rid of his disruptive influence on the young Lycan within his care. With this ceremony the young Griphyne became fully indoctrinated within the house, and bestowed upon him the family title of Nor.

Left to his own devices, the newly proclaimed Griphyne Of Nor cast his back to the traditions and alone took it upon himself to venture beyond the Southlands granted to their House before the guild wars. His journey took him north into Regent Valley, and onward past Fort Ranik into the grounds of Serenity Temple, the place that was to become his home for the next eight years. How he came to be accepted in the temple is somewhat of a mystery. There is reason to suggest the young priest Mhenlo may have seen potential within him, and at risk to his own priesthood insisted upon his acceptance free of priestly trials, but this is denied by Griphyne implicitly. If we are to believe his own recollection, a certain high ranking member of the priesthood, in a state of complete drunken stupor declared that he head a love for all mankind and especially those around him. It was here he supposedly offered to each and every man woman and child the option of joining the priesthood free of all the vigorous training he declared as “trumped up tengushit”. Upon his recovery in the coming days, all were expelled except for Griphyne, in a set of events Griphyne makes no attempts to explain away. However if this is the case, it has vehemently been suppressed by the priesthood of Serenity, since not a scrap of evidence exists that supports this story. What is recorded is Griphyne’s inability to stay within the temple, often taking great expeditions beyond the territory of Ascalon for months, and returning again as swiftly as he had left. However, at the age of sixteen he took it upon himself to make his last expedition, but this time southward into the Lands granted to the Nor so long ago in search of family. It was to become the last time he would see Serenity until long after the heat of the searing had torn the holy structure apart.