Kwai Chang Caine is a fictional television character played by David Carradine as an adult, Keith Carradine as a younger Caine and Radames Pera as the youngest Caine, in the 1972-1975 western television series, Kung Fu.

In the late 19th century China, Kwai Chang Caine was the orphaned son of an American man and a Chinese woman. He was raised in a Shaolin monastery, and was trained by the monks to be a Shaolin master. Kung Fu follows his adventures as he travels to the American Old West (armed only with his skill in martial arts) as he seeks his half-brother, Danny Caine. Although it was his intention to find his brother Danny in a way which would escape notice, the demands of his training as a priest in addition to the sense of social responsibility which was instilled within him during his childhood, forced Caine to repeatedly come into the open to fight for justice. He would then leave his new surroundings in a further search for anonymity and security. 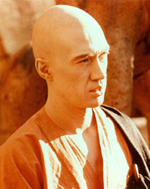