Centuries ago, Lo Pan, a great warrior, was defeated in battle by the First Sovereign Emperor, Qin Shi Huang. The Emperor placed upon Lo Pan the curse of No Flesh. Although Lo Pan can be temporarily granted a decrepit body by supplication to the gods, in order to permanently break the curse and regain his human form he must marry a woman with green eyes, who must also be a daughter of a holy man (a fact not explicitly explored in the movie). Simply marrying her will please the God of the East; but to satisfy the Emperor, he must sacrifice her. Lo Pan is served by a ruthless street gang, the Wing Kong, and the Three Storms – three mystical henchmen named Thunder, Lightning and Rain. 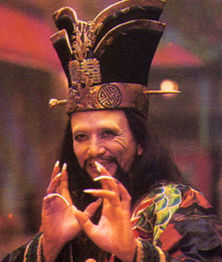