Scorpion is one of the most popular characters in the Mortal Kombat series. Formerly a human ninja and member of the Shirai Ryu clan, Scorpion is now a black and yellow garbed, hell-spawned spectre, inexorably seeking vengeance against those responsible for the destruction of his clan and the death of his family. Despite the fact that Scorpion has previously allied himself with the forces of evil (when promised either a means of resurrection on Earth or the chance to inflict his wrath against those who butchered his clan), he is not inherently evil. In fact, Scorpion has, at times, indirectly assisted the game's protagonists, although his reasons for doing so always ultimately serve to benefit his own motives. Fans of the series often perceive Scorpion as the title's foremost anti-hero, due to his tendency to undertake actions which serve to benefit good, albeit in his own gruesome, self-serving and vigilant manner. Scorpion's demeanor, characteristics, persona and self-reliance have all contributed to his popularity, with Scorpion ironically appearing as the most human in nature and choice when compared to the purely virtuous "good guys" and the diabolically evil "bad guys." 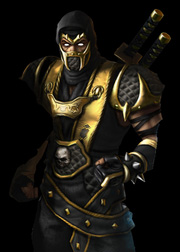 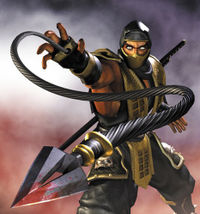