Voldo (ヴォルド, Vorudo?) is a fictional character designed for the Soul Series of fighting games. Voldo made his first appearance in Soul Edge and has returned for all the following sequels.

Voldo is easily recognizable by his strange and unique style of play. Voldo's moveset is based on attacks that bends and twist Voldo's body in unnatural ways, making him an extremely unpredictable fighter. He also has many stances that compliment his odd style, like his Mantis Crawl in which he stands on his four limbs face-first. Even his neutral stance has him waving his body slowly to both sides.

Another recognizable feature of Voldo is that he has no spoken dialogues, just grunts and hisses. This is explained in the game's universe because of his isolation in his dead master's tomb, which has led him to lose his sight and become insane, often hearing his master speaking to him in his mind. Later games have hinted that Vercci's voice could be produced by Soul Edge itself, but no official confirmation has been made.

Voldo first appeared in Soul Edge, offering the first insights of his unpredictable play style and mannerisms. Later, in the sequel, Soul Calibur, he gained many of his staple moves and traits that would later stay in his reappearance during following games Soul Calibur II and Soul Calibur III. He is one of the few characters to have been present in every version (either arcade or home) of each game in the series. Voldo remains one of the most known characters in the series because of his unique style and unpredictability. 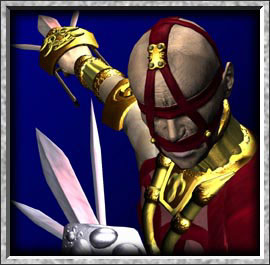